It is a mind-blowing experience and the closest you can get to live a Selena concert.  Simply, the best Selena tribute band out there! All of its band members have lived and played to the remarkable music that Selena brought to us for at least 15 years.  After living through her music, they wanted to have an opportunity to bring this incredible show to all of her fans.  For the past two years, they have performed this amazing experience to Selena fans across the country.  These musicians came together and orchestrated an extraordinary show that will have you back in 1995 within seconds of their first song. Los Chicos del 512 will bring to you the finest Selena tribute that you can possibly imagine. Now, get ready to sing, dance and relive Selena!

EVELYN MOLINA
// lead singer
Born in Yuma AZ, Evelyn Molina's musical career began at the young age, Discovering her talent at only 3 years old. At the age of 8, she began performing for local events in her community with the local kids band "Ritmo Latino Jr". By age 11, Evelyn competed in the hit Univision show "Quiero ser Estrella" (produced by superstar game show host Don Francisco). She went on to become a three time winner of the show. Throughout high school and early college years Evelyn continued to execute her craft as a soloist in regional events throughout Arizona, Sonora and Baja California. She has had the opportunity of performing with local bands as lead singer and In 2014 Evelyn was a contestant of La Voz Mexico 4, where she was a member of Ricky Martin's team. Aside from being lead singer of Los chicos Del 512, Evelyn has had success as an entrepreneur. She is the mastermind behind her family's chain of restaurants, which are becoming very popular in the southwestern part of Yuma County. You can now find her as the lead singer of "Los Chicos Del 512". She is honored to portray the legend that is Selena. 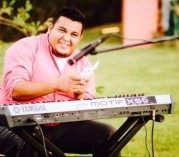 Keyboardist, music director and social media manager, was born in Mexicali, Mexico, but raised in Somerton, AZ.  He has an amazing career of 23 years in the music industry, specializing in música grupera.  He has an extensive curriculum since 1992 performing for major events, as well as private parties with diverse versatile music groups.  Furthermore, Rica earned a Master’s Degree in Multicultural Education from Northern Arizona University and currently teaches 6th grade Math and Science.

He is the guitarist and responsible for music arrangements.  He was born in California and began his musical career at the age of 9.  He has been performing for over 20 years and has an extensive career that includes studying music both at Arizona Western College and Arizona State University. Martin’s great talents went as far as touring with Mexican singer Pilar Montenegro. He is the music director for Gadsden Elementary School District Marching Band, which has performed nationally and internationally.  They participated in the London New Year’s Parade in 2013.  Currently, Martin is the head producer of HALO records, a record label owned by him and two colleagues. Martin Peralta is proudly endorsed by Pena Custom guitars.

Bass player, is from Yuma, AZ. His career and passion for music started in 1993.  He describes his instrument as the “Soul of Music”. Since then, he has played with numerous local bands across the county and in Mexico at local events and private parties. His collaborations in the music industry as a producer inspired him to become a recording studio audio engineer. Jesus has a Master's Degree in computer engineering.

He is from San Luis, Arizona. He is the band's percussionist and newest member. Jimmy has an extensive musical career performing both Latin and Jazz genres in Mexico and the US. He is a member of the ADOC Honor Guard Pipe and Drums Core. He is also the percussionist for a local band called Sunset Band.

Drum player and music producer, was born in San Jose, California.  He started his career in his teens at the local church choir.  His passion for music led him to play with different local bands in Mexico and Arizona.  His bands, along the years, have been opening acts for several famous Spanish Rock bands/singers such as Aleks Syntek, Panteon Rococo, Enanitos Verdes to mention a few.  Mario is also a co-director for the Gadsden Elementary School District Marching band, leading the drum line in the London New Year’s Parade in 2013 and numerous performances across the country. He is the owner of Halo Records and Member of 512 Productions.